This really makes you wonder- if it is impossible to achieve the speed of light how come the photons achieve this speed so easily, and to top it all, they seem to be everywhere in the universe. Anything traveling at the speed of light must have infinite energy or mass, but photons zero mass.   If you apply the tool kit of the special theory of relativity to the photon, the implications are profound and breathtaking.  Let us talk about this now

To explain the implications of this theory, Einstein provided a thought experiment, as it was impossible for cars or rockets to reach speeds anywhere close to the speed of light.

Your twin brother goes on another trip and now he increases his speed to 0.9999c. He measures the speed of light and he still finds it to be c, the same as you will find on earth. His clock will be running very slowly as compared to your clock on earth. He returns after 50 days according his clock. Your clock on earth will show he has travelled for 10 years. Amazing stuff! His spacetime is extremely compressed.

Here’s an addition to the Einstein thought experiment. Your twin brother enjoys being in space. He goes back for another trip, and now his rocket travels at the speed of light c. He is tries to measure the speed of light, but he is unable to do so. Light travels at c and his rocket is also traveling at speed c, both are going in parallel to each other speed wise. To make a measurement you need light to bounce of an object, but if the rocket and light are going at the same speed, it is impossible to take this measurement. When he returns to earth, your clock shows he has travelled for 10 years, he will find his clock is at a standstill, no time has passed for him. Also, according to him he has covered no distance. You aged 10 years; he felt he did not go anywhere, both time wise and distance wise and therefore did not age at all.

Now replace the rocket and the twin brother with a photon. The photon will have the same experience as your twin brother travelling at speed of light c in a rocket. Here’s what you could say the photon “experienced” the following according to the special theory of relativity.

What is your experience as an observer stationed on earth tracking a photon traveling for 10 years?

According to the photon, it feels it is at a standstill not covering any distance. However, the observer feels the photon is covering a large distance traveling at the speed of light. How do we interpret this information? Based on the information we have understood, we can make the following important conclusions

We know from studying Vedanta that Atma/Brahman is the underlying reality of you and of the universe. It is the Observer of your mind and it is beyond the space time framework. We have also analyzed that from the photon’s point of view, the photon remains in an un-manifest condition in your Atma. When this photon enters your mind, it becomes conscious and manifests itself.

Energy which makes up this Universe

When the un-manifest photon meets our minds, it manifests itself and becomes a Vritti, which is like a mental wave within the mind. These mental waves or vrittis are the same as the probability waves which are explained by quantum physics, they are so similar in their functionality. We know from quantum mechanics that the probability waves collapse in the presence of the observing system. In the same way the mental waves of the photon collapse in the presence of Atma, which is the observing system in our minds. Maya Shakti then projects this collapsed wave function as the visible physical universe we see around us.

Put in simple terms, the universe is a manifestation of just the photon. In its un-manifest form, the photon had a potential for infinite energy. This infinite energy is now unleashed into the entire universe.

Types of Energy in the Universe

As we have seen, the photon is the only particle in the universe which travels at the speed of light.  If we apply the theory of special relativity to the photon, the photon will feel it does not travel any distance, that time is at a standstill and that it has an infinite amount of energy. In the presence of the observer or from the point of view of the observer, the picture is very different, infinite energy is distributed all over the world and photons are zooming around the universe at the speed of light.

It must be clearly understood that the only energy available in the universe is the energy provided by photons. 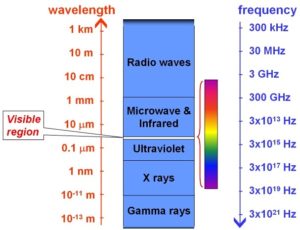 A photon in a wave form is also known as an Electromagnetic Energy Wave (EMV). The known spectrum of light starts from Radio waves (300 Khz) to Gamma rays (3 x 1021) Hz. This spectrum of energy covers the universe. It is the source for everything. All objects are made up of energy and this energy comes with the manifestation of the photon in the presence of the observer or Atma.

The energy described above is the physical or visible energy. Keeping the size of the universe and estimating the number of galaxies, cosmologists have estimated the composition of the universe in this way –

Only 5% of the energy is used to create the visible galaxies. We must note that 73% of the visible universe is made of hydrogen, 23% Helium and 2% is made of the remaining elements. The cosmologist still has no clue what this dark energy/matter is. They have not seen it nor identified it. It’s just an assumption to explain how the energy needed to fuel the expansion of the universe is “created”.

Dark energy, Dark matter and the Visible Matter, all have the roots in the infinite energy source of the photons in the un-manifested Atma.

Understanding Vedanta and Science are looking for the same Reality